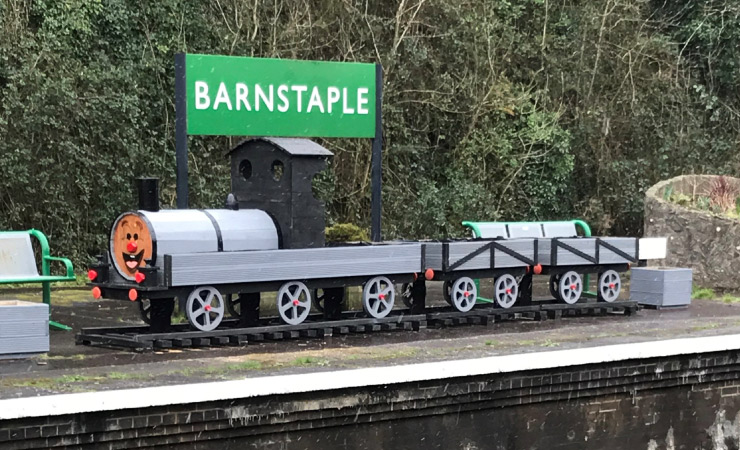 A new train has arrived at Barnstaple station and we want your ideas for what it should be called. Suggest a name below – the best suggestion will win a pair of standard class tickets anywhere on the Great Western network.

Competition now closed – the winning suggestion was Barney. Thanks all who entered! 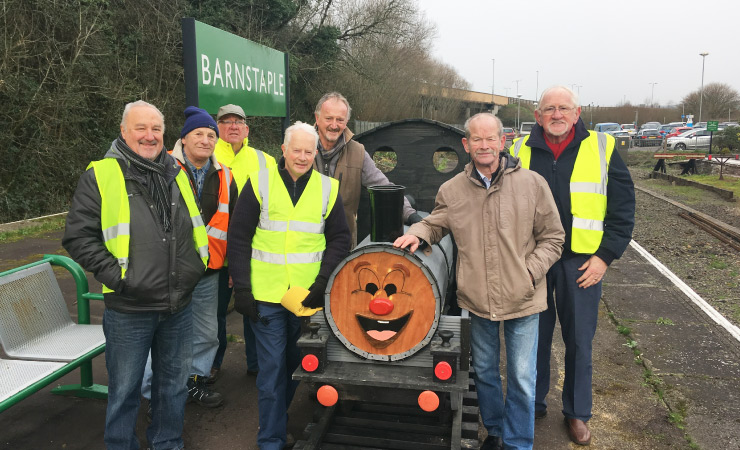 Volunteers from local charity Men’s Sheds in Torrington built the wooden train for the disused platform at the station to provide much needed extra planting space.

The project was pitched to the group by Rebecca Catterall from the Devon and Cornwall Rail Partnership as part of the ongoing work to the gardens at the station. She said:

“The idea for the planter came from a similar project run by the Three Rivers’ Community Rail Partnership at Chandlers Ford station in Hampshire. We wanted something we could use to add in extra plants and flowers to brighten up the station that would look great all year round. The fact that we could support a local charity at the same time was even better.”

“The group got a lot of satisfaction out of this project, sharing their skills and working together. Men’s Sheds is a great organisation that gives us all the opportunity to be creative and spend time with a bunch of good blokes!”

“The station at Barnstaple is at the heart of the community we serve, and we are incredibly grateful to the volunteers who dedicate their own time to help us to maintain and improve the station environment.”

Next steps to transform the platform

The arrival of the train is the latest stage of the project to transform the disused platform and its planters which had become heavily overgrown. Next is to start adding flowers and shrubs to the new planter with the help of volunteers from Barclays Bank Barnstaple, Network Rail and the Tarka Rail Association.

More help is needed and any other groups who would like to get involved with the project at Barnstaple are asked to contact Rebecca Catterall at the Devon and Cornwall Rail Partnership on 01752 584777 or email railpart@plymouth.ac.uk.

Funding for the new train planter has come from the Designated Community Rail Development Fund which is backed by the Department for Transport and ACoRP, the Association of Community Rail Partnerships.

The competition closes on 9th March 2018, after which time no entries will be considered.

Entrants can enter as many different names as they like.

The competition is run by the Devon and Cornwall Rail Partnership (see full contact details).

The Devon and Cornwall Rail Partnership team will pick what they consider to be the most apt and appropriate name as the single winner. Their decision will be final and no correspondence will be entered into.

The prize for the winner is one pair of standard class rail tickets for a return journey anywhere on the Great Western Railway network (see network map PDF). No cash alternative will be offered.

The winner may be asked to take part in PR activity (for example a photo for press and social media).

Presuming contact can be established in a timely manner, the winner’s name and their entry will be published in early March on this webpage and on Facebook.com/greatscenicrailways and Twitter.com/dcrailpart.