The most recent addition to the Partnership's fold

The East Devon Line is the newest addition to the lines on which we work.

Most of the trains are through West of England Line services to and from Yeovil Junction, Salisbury and London Waterloo and these run hourly through much of the day, seven days a week.

Cranbrook is Devon’s newest station. The £5 million station to serve the rapidly expanding new town opened on 13 December 2015. Cranbrook already has around 1,700 households, a figure set to rise to 8,000 in the next fifteen years.

The Office of Road and Rail estimate that there were 90,458 users of Cranbrook station during the April 2016 to March 2017 financial year.

We work to promote use of the trains very locally through targeted leaflets delivered to households in Cranbrook, Honiton and Axminster and far afield through including in the line in our Devon Great Scenic Railways and Devon Walks from the Railway booklets, both of which are widely distributed. We also worked with South Western Railway to promote travel by train to the launch of the Devon stage of the Tour of Britain cycle race in September 2018.

We are just starting a new Community Stakeholder Forum for the line where local people will join us, representatives from Devon County Council, other local authorities and South Western Railway to discuss issues, ideas and activities relating to the line and its stations.

Coming very soon is our new Community Fund. Up to £10,000 over the period to March 2020 is available to support community-led projects at the line’s stations or linked to the railway. We want to help and support local people and groups who want to get involved and make their ideas a reality, as far as is possible.

Two examples of this are the Schools’ station poster competition in Cranbrook, with the second round of posters on the station, and the great pictorial displays promoting East Devon in waiting shelters at Axminster and Honiton stations which were the brainchild of East Devon Council Tourism Lead Cllr Jenny Brown. 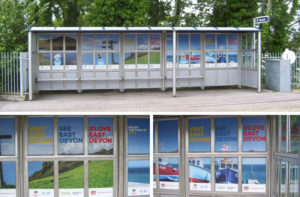 Promoting watching the Tour of Britain by train 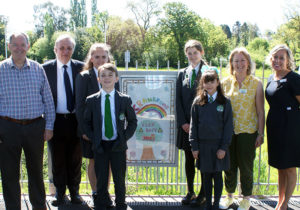 Explore our online visitors’ guide to the line on our Great Scenic Railways website.

Find out about the users group for the line, including how to become a member, on their website.