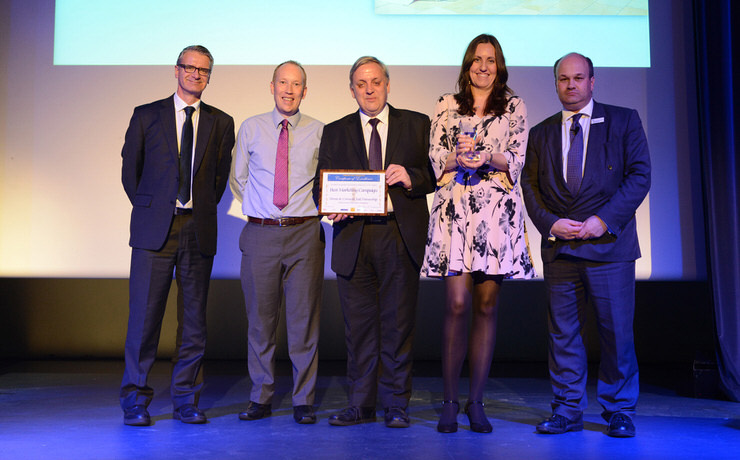 Three of the Partnership’s projects have been recognised at a national level at the 2015 Community Rail Awards, held at Torquay’s Riviera International Centre.

In front of an audience of more than 330 rail industry staff and volunteers, the Partnership’s Great Scenic Railways won first prize in the Marketing category. As well as the recent revamp of the website (carried out with Falmouth-based agency Gendall), the award also recognised our swashbuckling Visit Poldark Country By Train mini-site, onboard Wi-Fi collaboration with Great Western Railway and stall at London Paddington and an eye-catching advertising campaign. This led to a 40% jump in website traffic for the Devon and Cornwall Rail Partnership in our work to attract more tourists to the region.

The Partnership’s projects were also recognised in two other categories:

The family-friendly Minibeast Trail on the Riviera Line between Exeter and Torbay was awarded third place in the Small Community Art Schemes category. Working with artist Melissa Muldoon, pupils from Gatehouse Primary School in Dawlish and the Sure Start Dad’s Club Stay and Play in Teignmouth made sculptures of butterflies, dragonflies, bees, ladybirds and snails from recycled plastic. They were displayed on planters at Teignmouth, Dawlish, Newton Abbot, Torquay and Paignton stations.

The awards also saw the Riviera Line’s EU Citizens’ Rail project recognised with third prize in the Outstanding Teamwork category. Locally the project delivered improvements to stations, additional services between Newton Abbot and Paignton, and work to engage school children and volunteers along the line. Partners from France, Germany and the Netherlands collaborated on all of these activities, lending their ideas and support and even donating Dutch tulips to brighten local station gardens.

Richard Burningham from the Devon and Cornwall Rail Partnership said:

“These awards show the real breadth of work that takes place to promote our railways – from innovative marketing campaigns, to working with local school children, to learning from our continental colleagues. Congratulations to all involved. By working in partnership we’re attracting more and more passengers and building stronger links between the railway and the community.”

“We have been proud to play a leading role in the Citizens’ Rail project which has resulted in an enhanced train service and significant investment in stations. This has transformed the line between Exeter and Paignton and we are pleased to be recognised through these awards. Throughout the Great Western network, community rail groups play a leading role, adding value to projects designed to improve services and make stations safer, friendlier and greener.”

The Community Rail Awards is an annual event organised by the Association of Community Rail Partnerships which celebrates the work being done to promote and enhance Britain’s local and rural railways.