The Tarka Line’s best ever service – or is it? 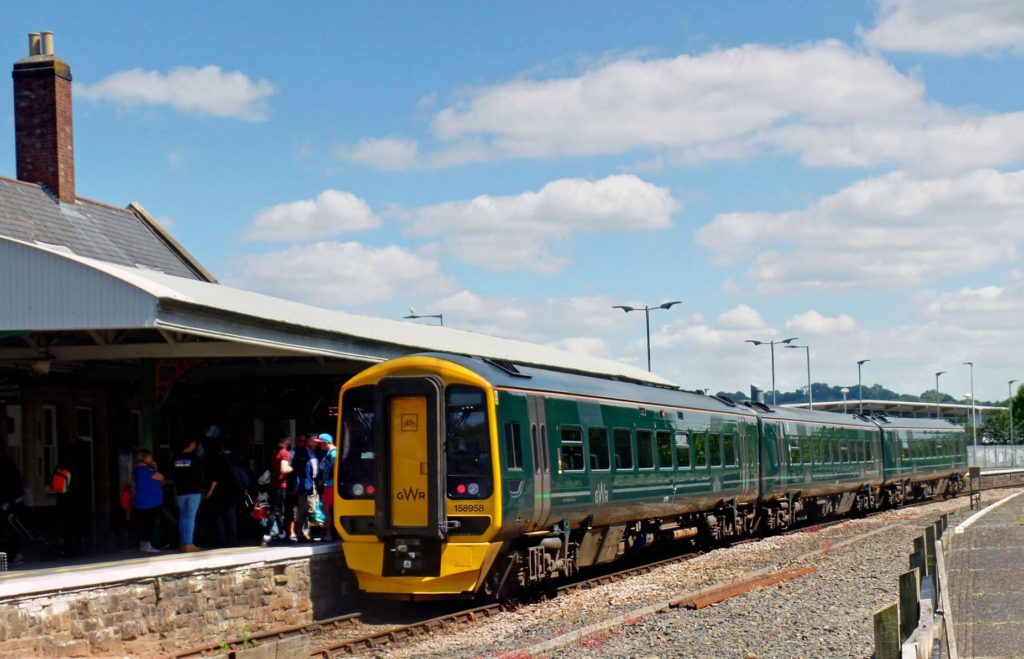 The Exeter – Barnstaple Tarka Line now has the best service of its entire 165 year existence and in this post I’m going to take you back to show why that is true.

First off, what does “Best ever” mean here?  It means that the line now has a more frequent train service than ever before.  From last December, there are now 17 trains a day each way between Exeter and Barnstaple, Monday to Saturdays, and 13 on Sundays.

Even before the days of mass car ownership and when holidaymakers were able to take trains right through to Ilfracombe, the Exeter – Barnstaple line did not see so many trains, except on peak Summer Saturdays.  Partly this is because, until 1 October 1966, there were two routes between Barnstaple and the main lines to the rest of the country.

The other route went through South Molton and Dulverton across to Taunton and some Ilfracombe holiday trains were routed this way.   Part of the old railway still serves a transport purpose today – west of South Molton, the old trackbed is now the North Devon Link Road.

Number of services from Exeter to Barnstaple per day

Friday and Saturday only trains not included

Figures to 1975 from Middleton Press book Exeter to Barnstaple

Another part of the reason is that, in steam days, the line was difficult to work.  This was a direct result of a pact in 1910 between the owners of the line, the London & South Western Railway (L&SWR), and the Great Western Railway where the companies decided to pool their revenues from  competing services and agreed not to improve these routes.

Two things resulted immediately from this pact.  The competition to carry passengers coming off the ocean liners at Plymouth as fast as possible to London ended and the L&SWR cancelled their plans, for which they had authorisation, to fully double the line between Exeter and Barnstaple, leaving long stretches of single track north of Copplestone.

Incidently the pact was for 90 years and was meant to have lasted until 2000.   The agreement caused much upset in North Devon which lasted many years.  The National Archives has the record of a deputation to the Minister of Transport in 1947, backed by both local MPs and all the principal local councils.

Following the closure of the railway to Ilfracombe on 5 October 1970, the Exeter – Barnstaple line was the sole remaining passenger line serving North Devon.  The number of trains on weekdays remained much as it had been for decades but Sunday services were reduced.

The bounceback began in earnest in the late 70s.  Devon County Council helped fund station improvements including a new ticket office and travel centre at Barnstaple station, which opened in 1981, and a promotional campaign.  In 1988, they joined with British Rail on a bigger, rolling programme to promote use of the trains and improve stations.  This grew into the Devon & Cornwall Rail Partnership in 1991 and we have been working with the railways to promote and develop the line ever since.

In 1992, Devon County Council began subsidising British Rail to run more trains, initially between Exeter and Crediton.  In time, these were extended to cover the whole line and further service improvements were made.  The subsidy ended in 2016 with services that had been subsidised now being included in Great Western Railway’s contract with the Government.

Another key element in the improvements has been the Tarka Rail Association (http://www.tarkarail.org) which seeks to represent the line’s passengers.   Set up in 1978 as the North Devon Railway Line Development Group, the Association is now one of the oldest such groups in the country and has worked closely with the railway, Devon County Council and ourselves to better the timetable.  One of their key achievements is the late train back from Exeter on Friday nights which was introduced in December 2010.

None of the improvements would have been possible without the commitment and enthusiasm of the railway, especially Great Western Railway who have turned a great many aspirations into reality.

But the main reason of all why the Tarka Line now, in 2020, has its best ever service is because you, the public, are using the trains in greater numbers, with a huge increase in the number of journeys made since 2001.  Back then, 199,000 journeys were made on the line (based on ticket sales, with a return ticket being two journeys).  By 2010, the figure had more than doubled to 467,000 journeys that year and in 2019, 669,000 journeys were made, more than triple the number made in 2001.

Together with the increase in the number of trains has come better trains, as shown in the photo.  Three coach Class 158 trains are now used for most services.  They have transferred from the Cardiff – Bristol – Southampton – Portsmouth route and are more comfortable with more seats, more tables, air conditioning, plug points for mobile phones and free wi-fi.

There are several more aspirations still to fulfil on the Tarka Line.  First and foremost is looking to increase the speed trains can travel and reduce journey times.  Network Rail and GWR are working closely on this.