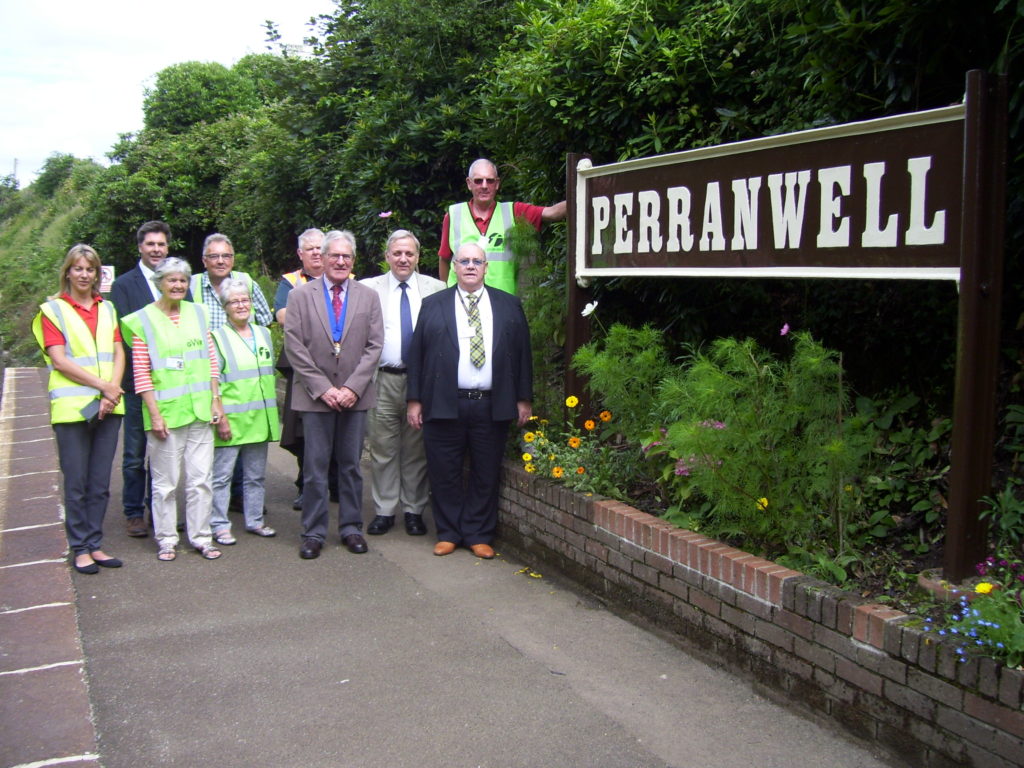 A historic station name sign at Perranwell station, which is on the Truro – Falmouth Maritime Line, has been unveiled following its restoration. The sign was unveiled by local Cornwall Councillor Peter Williams and Graham Brown, Chairman of Perranarworthal Parish Council.

The large cast iron sign was originally installed on the station by the Great Western Railway when Queen Victoria was on the throne in the late 1800s. It may even date back to 1864 when what had been Perran station was renamed Perranwell, only months after the line and station had opened in August 1863.

Its restoration has been led by the local volunteers of the Friends of Perranwell Station. Great Western Railway provided the paint and the Devon & Cornwall Rail Partnership funding for the work to be done.

The Friends and Great Western Railway have done much planting at the station and one of their next projects is to restore the remains of the platform well, which once provided the station’s water supply.

Stuart Douglas of the Friends said “It is great to see the sign looking so resplendent and we’d particularly like to thank Great Western Station Manager Lee Goodson, Environmental Team member Phil Mankee and the Devon & Cornwall Rail Partnership for their help in making this happen.”

Lee Goodson, Great Western Railway’s Station Manager for West Cornwall said: “The communities we serve play such an important part in the railways, helping to provide an attractive and secure environment both at GWR’s stations and in the surrounding area.

“We would like to thank the Friends for the willingness they have shown to improve the station.  There is a real sense of pride in how the area now looks. The station feels an integral part of Perranwell and a greater part of the community it serves.”

Richard Burningham, Manager of the Devon & Cornwall Rail Partnership, said “Stuart and the other members of the Friends of Perranwell Station are doing a great job in helping make the station look as good as possible and also in promoting use of Perranwell’s train service. All power to their elbow and we’ll always help as much as we can.”