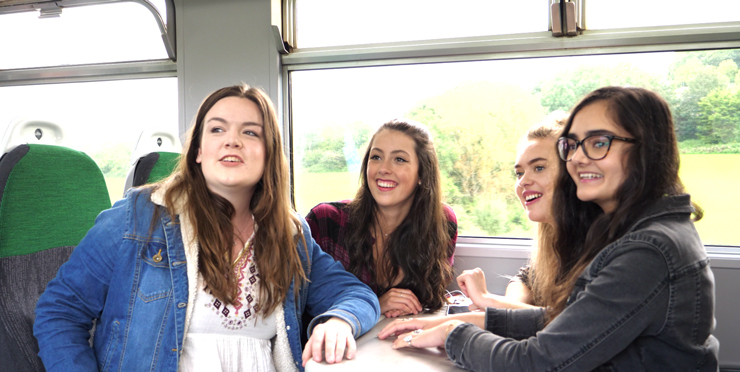 In response to the growing importance of video marketing, the Devon & Cornwall Rail Partnership has produced a series of short films to showcase the South West’s scenic branch lines.

The videos – all under 90 seconds long – have been promoted through targeted Facebook advertising, reaching hundreds of thousands of people and garnering an extremely positive response.

The filming and promotion of the videos was part funded by the Designated Community Rail Development Fund. The Fund is backed by the Department for Transport and ACoRP, the Association of Community Rail Partnerships.

Plymouth to Looe day out

The first film to be produced was a ‘how to’ guide focused on the journey from Plymouth to Looe – showing not only the scenic nature of the trip but also important practical details including how to buy tickets and how to navigate the connection at Liskeard. The film was made by Liskeard-based videographers Studio Wallop.

With an advertising budget of just £200 the video reached more than a quarter of a million people on Facebook and received more than a thousand Likes. Comments included:

A further collaboration with the same film-maker showcased the Looe Valley Line from an entirely different vantage point thanks to the latest drone technology.

Again the film proved an excellent way to raise the profile of the line. It received more than 2,000 Likes on Facebook, with more than 500 people sharing the video with their friends – providing great third party endorsement.

A second ‘how to’ video focused on a trip from Exeter to Barnstaple. The film followed four local students, highlighting the bike hire facilities at Barnstaple station and a ride on the Tarka Trail:

Comments on Facebook beneath the video showed how online promotion can translate into higher journey figures:

The final ‘how to’ video highlighted the scenic journey from Plymouth to Calstock, again using local students as actors. Filming was coordinated with local businesses and organisations including the National Trust. These partners also helped promote the final film in a great ‘win-win’ for all involved.

Both the Tarka Line and Tamar Valley Line videos were shot by Ice Creates, who were originally used by the Partnership as part of the award-winning Seize The Sunday project.

Follow the Partnership’s Great Scenic Railways Facebook page to keep up to date on its future marketing campaigns.