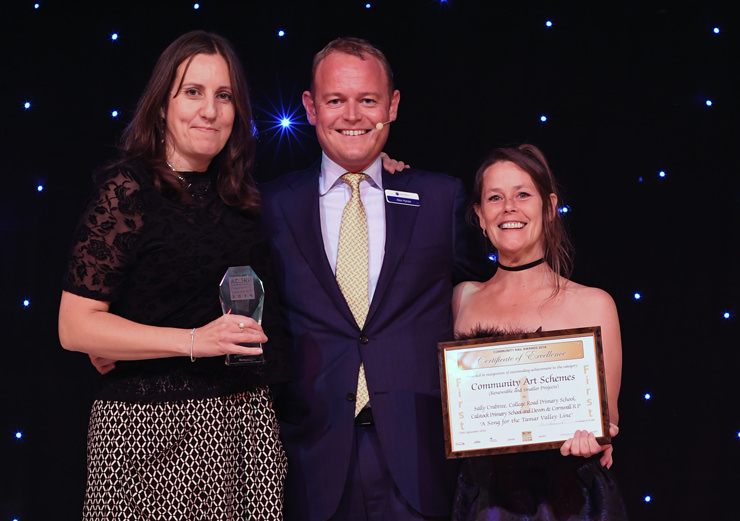 The Devon & Cornwall Rail Partnership was recognised in multiple categories at the annual Community Rail Awards held in Southport on 29th September 2016, and helped Great Western Railway to win the prestigious overall award.

This was followed with a second place for the ‘Mini Adventurers take the train’ marketing project, and third for the ‘Loop the Loop’ community engagement event. Exeter St Thomas and Copplestone were also named in the Gold category for the It’s Your Station section of the awards.

All of this helped Great Western Railway (GWR), its Community Rail Partnerships and volunteers to win the Overall Winner award. Judges praised the “strong ongoing commitment to the spirit of Community Rail, clearly showing what sustained partnership working can achieve in the sector”.

Linking two schools at either end of the beautiful Tamar Valley Line, this project aimed to broaden the horizons of the children involved by getting them out of the classroom and on to the train to create a song which captured the essence of the line and inspire the local population to visit too.

Composed and recorded over two days, the final product was an art installation for the day at Plymouth station featuring a Dial a Song phone booth to hear the extremely catchy song. Passengers described the project as “fascinating” and dozens even created their own poems. Read more.

The best way to forge a connection with passengers is on their own terms – and nowadays that means on social media. To inspire families to try the train, the Devon & Cornwall Rail Partnership ran a video campaign on four social networks – Facebook, Twitter, YouTube and Instagram – to highlight the enjoyment and sense of adventure that young children get from travelling by train.

The 25-second video was produced in-house, using volunteers as models and for the voiceover. Thanks to innovative audience targeting techniques and an advertising budget of just £200, more than 10,000 parents viewed the video within a fortnight. Loop the Loop; Branching Out was a two day event celebrating the Looe Valley Line and Cornwall’s railway heritage. It engaged young and old in a creative and fun way.

Volunteer ‘heritage experts’, recruited through the project, shared their steam railway memories and research with the 200 members of the public who enjoyed the event’s pop-up library, railway exhibition and art sound performance. The Friends of Copplestone Station with support from the Tarka Rail Association have transformed the station, with an attractive garden, new planters and seating thanks to funding organised by the Devon & Cornwall Rail Partnership, including a grant from the Designated Community Rail Development Fund. (Entry submitted by Great Western Railway and the Tarka Rail Association) Riviera Line’s Artist in Residence Melissa Muldoon involved children at Starcross Primary School in writing, illustrating and promoting ‘The Seaside Train’ book, to inspire families to take a trip on the Riviera Line which links Exeter, Starcross, Newton Abbot and Paignton. The book is professionally designed and self-published on Amazon (get your copy). 70 copies of the book were published, 45 sold by 15 June 2016, proceeds to Starcross Primary School’s solar panels project. The book includes the children’s poems inspired by the Citizens’ Rail train, a single coach train given a special livery by GWR, including fantastic adventures under the sea.