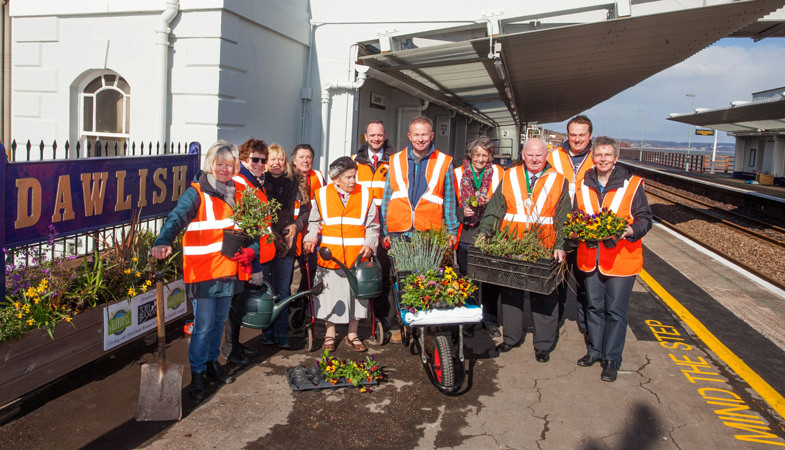 The previously dormant Friends of Dawlish Station volunteer group was rejuvenated as part of the Partnership’s EU Citizens’ Rail project, making headlines and even meeting the Prime Minister thanks to their green makeover of the station following February 2014’s treacherous storms.

During the line’s eight-week closure following the storms, we revived the group by arranging work days and recruiting new members through an appeal in the local newspaper.

Working alongside TV gardener Toby Buckland, who lives locally, the volunteers proceeded to give the station a green makeover. The group planted cordylines, lavenders, pansies, violets, primroses and other species in 10 new planters installed on the platforms. In the run-up to the high profile re-opening of the line, the volunteers also decked out the station with bunting to celebrate the occasion.

Thanks to their hard work, the group became front page news in the local press, were featured on BBC regional TV news, and were interviewed on BBC Radio 4 and filmed by Channel 5. Members of the group were also invited to Downing Street and thanked by Prime Minister David Cameron.

In August 2014, the Friends of Dawlish Station were again in the spotlight when they were personally thanked for their efforts by the UK’s Secretary of State for Transport, Patrick McLoughlin MP. The Secretary of State visited the station with Great Western Railway, Network Rail and local MP Anne Marie Morris to discuss the future safeguarding of the line and to meet the Friends group and see the fruits of their labour.

The group is now self-sustaining and undertakes regular watering of the plants that now brighten the station. This creates a welcoming first impression for visitors to the town. The success of the group was followed up with the creation of a neighbouring Friends Of Teignmouth Station group.

Keep up to date with the Friends of Dawlish Station on their Facebook page.