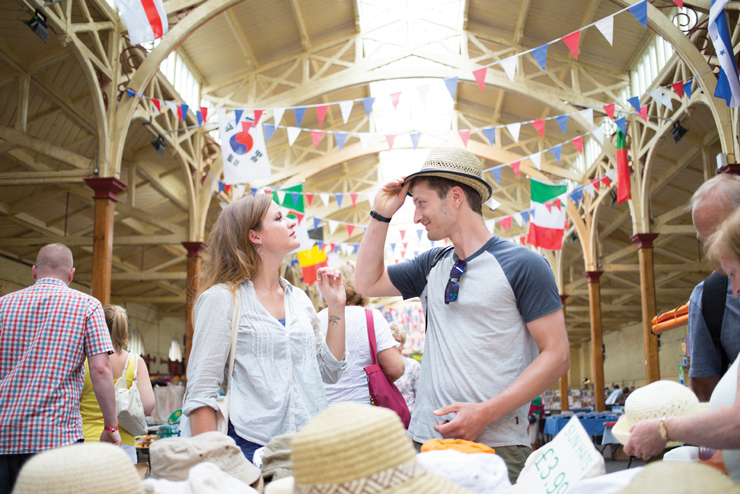 Train trips to Barnstaple from Exeter and local stations including Topsham and Crediton are half-price starting this week, thanks to a new offer to encourage more people to explore North Devon on the scenic Tarka Line.

From Saturday 22nd October, day return tickets are just £5 from Exeter stations, instead of the usual £10. Children aged 5 to 15 get a further 50% off, giving families a great value day out.

The promotion is a partnership between the Tarka Rail Association, Great Western Railway and the Devon & Cornwall Rail Partnership.

“The Tarka Line is one of the South West’s most scenic railways, and this offer gives people a great opportunity to enjoy it. There’s lots to do in Barnstaple, from hiring a bike at the station and trying the Tarka Trail, to exploring the historic pannier market [pictured above]. You can also hop on a bus right at the railway station and head out to Ilfracombe and Bideford.”

Trains run hourly through most of the day in both directions (Monday to Saturday, with a reduced service on Sundays). You can go direct from stations including Exeter Central and Exeter St Davids, with the journey taking approximately 1 hour 15 minutes. Tickets can be bought on the day. To receive the offer, the outward journey to Barnstaple must be made after 09 00.

“Increasing passenger numbers on quieter services is one of our main aims. We hope that this year’s offer will be as big a success as previously. In 2014/15 a similar promotion led to 37% more journeys – a fantastic achievement.”

“Great Western Railway is proud to support the communities we serve. We are delighted to announce this offer, helping those who fancy a trip to Barnstaple for the pannier market, out further into North Devon or to the many pubs and walks accessible from the line.”

The £5 fare is from Exeter stations including Polsloe Bridge. Tickets from Digby & Sowton, Newcourt and Topsham are £5.05. Tickets from Crediton cost £4.05. Children (5 – 15 years) travel for half these fares. The half-price offer runs until Easter 2017, although fares are subject to a small increase in the New Year.