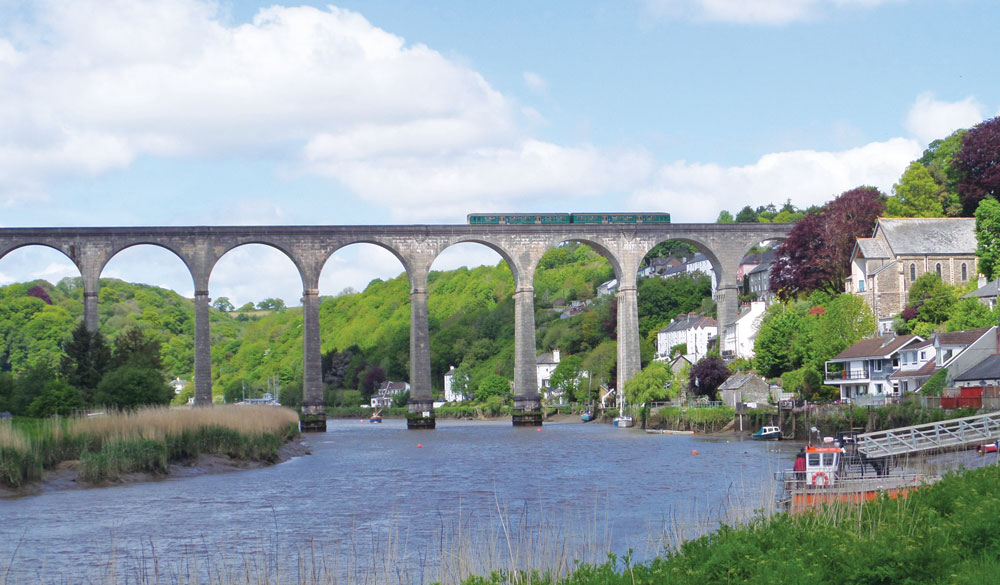 Children will soon be able to travel for free on Tamar Valley Line trains as part of celebrations to mark 50 years of regular direct rail services between Gunnislake and Plymouth.

On Sunday 3rd June 2018, there will be an Open Day at the Tamar Belle at Bere Ferrers station. Children (aged up to 15 years old) can also travel free on the line between Plymouth and Gunnislake all day long.

A weekend of special events will kick off on Friday 1 June, with a  cake being cut on the 10 54 train from Plymouth to Gunnislake as it crosses Calstock Viaduct to mark the 110th anniversary of the Viaduct and the railway between Bere Alston and Gunnislake opening.

On Saturday 2 June, Les Deering, Tamar Valley Heritage Guide, will be leading a railway-themed walk, organised by the Tamar Valley AONB.  The walk will start at 11 40 from Calstock station, to coincide with arrival of the train from Plymouth at 11 32 and will finish in time to catch the 13 56 back to Plymouth. It will be around Calstock, focussing on the railway, history of the viaduct and East Cornwall Mineral Line.

Booking is essential, by calling 01822 835030 or e-mailing enquiries@tamarvalley.org.uk

The Flower Festival is taking place in Bere Ferrers Parish Church on Saturday 2 June.  The church is in the middle of the village, about ten minutes walk from the station.

Vintage bus trip – There will be a vintage bus trip from Gunnislake station to Okehampton station on Saturday 2 June, connecting with the 10 59 train from Plymouth and returning to Gunnislake and Calstock in time to get the 17 27 from Gunnislake and 17 39 from Calstock to Plymouth (arrive at 18 12).  The bus will stop in Brentor and Lydford and will pass the old stations at Brentor and Bridestowe.  There will be two hours in Okehampton and the Dartmoor Railway Supporters Association are running trains between there and Meldon.  The trip will allow a return train trip to be taken (cost of this train £5 adult).   The bus is a vintage single decker 1979 Western National Bristol LH, part of the WHOTT fleet   http://www.busmuseum.org.uk/

There is no cost for the bus trip itself.   There are a very limited number of seats available and booking is essential – please e-mail railpart@plymouth.ac.uk to book.  Bookings are now open to all but It would be helpful if you mention if you will be taking the train to Gunnislake to connect with the bus.   Friday update – there are still fifteen seats left

Sunday 3 June   Courtesy of Great Western Railway, children up to 15 years old will be able to travel the entire line between Gunnislake and Plymouth for free, all day. No pre-booking is required

There will also be an Open Day at the Tamar Belle Heritage Centre at Bere Ferrers on the Sunday.  The Centre will be open from 11 30 to 17 00 and trains will be running on the Centre’s own sidings, adjacent to the station.

There will be performances by the Tavy Tars Railway Musicians with light refreshments, drinks, cream teas & cakes on the refreshment side.  Admission is free.

New – If you like the Tamar Valley Line, make sure you can be in Bere Alston on the evening of Wednesday 27 June (NB – this is now postponed to the Autumn) .  It will be a very special occasion – more details next week.

The route between Plymouth and Gunnislake comprises two railway lines, the first between Plymouth and Bere Alston, which will celebrate its 128th anniversary on 2 June, and the second between Bere Alston and Gunnislake, which opened on 2 March 1908.  Both were parts of longer routes until the mid 1960s.  The line from Plymouth to Bere Alston used to continue to Tavistock, Okehampton and Exeter, with through trains to London Waterloo and Brighton, and the Bere Alston – Gunnislake line continued on to Callington (Callington station actually being in Kelly Bray).

There were three elements to the creation of today’s Tamar Valley Line service.

Firstly, Dr Richard Beeching, Chairman of British Rail, published his “Reshaping of British Railways” report in March 1963.  This was a very radical attempt to put the railways back on a firm financial footing.  He recommended a range of measures but the one for which he and his report are still remembered was the recommendation to close thousands of stations and thousands of miles of railway across the country.

The report (which was republished for the 50th anniversary and is readily available) contains a very long list of stations and lines to be closed.   Bere Ferrers, Bere Alston, Calstock and Gunnislake were all included and, had the report’s recommendations been implemented in full, there would be no railway in the Tamar Valley today and Calstock Viaduct would stand as a silent memorial to the railway, its staff, passengers and goods customers.

The closure process entailed British Rail proposing a line for closure.  There would then be an opportunity for people to object and a public hearing would be held by the Transport Users’ Consultative Committee (today’s Transport Focus) which would report to the Minister of Transport on the hardship that would be created by the closure of the railway, over and above that mitigated by the replacement bus services that were to be provided.  The Minister of Transport would then decide whether the closure should go ahead.

What happened (the second element) was that British Rail decided that Bere Ferrers, Bere Alston, Calstock and Gunnislake stations were collectively too busy and the provision of replacement bus services too difficult to go ahead with closing them.  So, in Autumn 1964, it published proposals to close Gunnislake – Callington and Bere Alston – Okehampton, keeping the other stations open.

The line between Gunnislake and Callington was first to close, on 7 November 1966, and today’s Tamar Valley Line service began in earnest when the much missed line between Bere Alston and Okehampton was closed on 5 May 1968.

The third element to creating today’s Tamar Valley Line service was in Plymouth.  Until 7 September 1964, the Tamar Valley trains took a different route in Plymouth to today’s, carrying on from St Budeaux Victoria Road through Ford and Devonport King’s Road stations to join the main line just west of Plymouth station.  The site of Devonport King’s Road station is now City College Plymouth.

For more than twenty years, the line only saw trains six days a week.  In 1991, Summer Sunday trains were introduced and ten years later, in 2001, today’s year round Sunday service began. The number of weekday trains was increased from eight to nine each way a day from 2008.