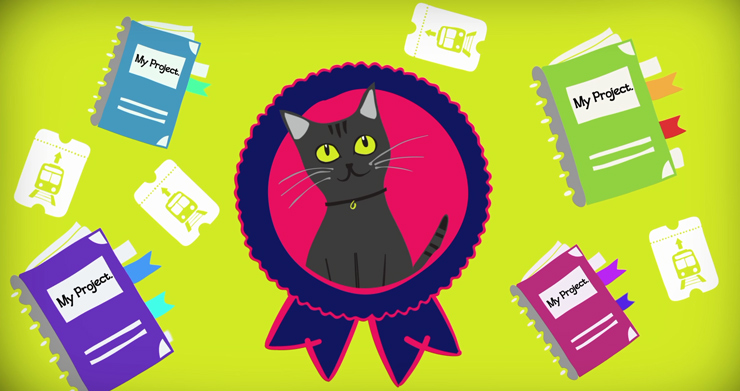 The Carbon Reduction Challenge was an inter-schools competition to encourage local schools to swap car journeys for train journeys to reduce their carbon footprint.

The idea behind the Carbon Reduction Challenge was to promote the railway and rail travel in a way which would cut across a number of curriculum themes.
Schools were invited to take part with the initial ‘hook’ of a free taster trip on the train.

Before this free trip, each school had a visit from Development Officer Rebecca Catterall who explained the idea of the project and played a specially commissioned video which starred the mascot for the project Coco the cat.

This engaging character encouraged the children to get out and explore their local area by train and encourage their friends, family and teachers to do the same.

The idea behind the video was to empower the children immediately to become ambassadors for the project so that they could sell the idea of train travel to their peers.

One of the early difficulties encountered was trying to get schools to sign up.

We initially decided to focus on a new line (the Maritime Line) where we had done very little school work before and this proved to be very difficult.

The exercise was useful though as it proved how important relationships are when it comes to schools projects.

When we contacted schools in and around the Looe and Tamar Valley lines, where we have worked extensively over the years, we had schools signing up within 24 hours of being contacted.

One of the key things we wanted to achieve was to involve the wider community in the project as opposed to just the class.

By getting the children to act as ambassadors at home and at school we hoped to change some habits through the traditional ‘pester power’ method.

The competition element came into this as well as it would give the children added incentive to get the adults involved.

Success was measured by the number of schools signing up to the Challenge and the quality of the final projects submitted.

For a pilot scheme to have eight schools sign up initially was very encouraging and teachers were interested and children enchanted by the animation.

In terms of the projects submitted these ranged from posters warning of the dangers of climate change, videoed debates and question time sessions around the themes to a rap and a book.

The winning school measured the carbon savings that were made for a month of swapping train journeys for car journeys and the final total was 1200kg or 1.2tonnes of CO2. This is equivalent to driving to Scotland and back three times from Cornwall.

The project the school produced was a book looking at a range of themes from what greenhouse gasses and fossil fuels are, through to sustainable transport and train travel.

The project fulfilled its objectives as we had a good number of schools involved, some great projects and a winning school that had put a huge amount of time and effort into measuring their carbon data and their creative project.

The news story put out on Facebook received over 1000 views; the Coco animation 520 views to date and the story was covered in the Cornish Times newspaper.

One of the unexpected results of the project was being invited to a STEM (Science, Technology, Engineering and Maths) learning day by Cornwall Learning due to the existence of the project.

This was a day for local teachers to meet with organisations that can help them with teaching STEM subjects and has resulted in a number of contacts for future projects with schools.

Ultimately the lasting benefits of the project will be on the children who have been involved though.

The children have developed their skills of persuasion and negotiation, key curriculum targets for language and literacy and through exploring the global concepts of climate and carbon reduction, the children have been given the opportunity to examine their own values and attitudes and understand the global context of their local lives.

“The children were fully engaged in the project and enjoyed completing the research, posters and collecting and analysing the data. We were able to use the project across several subject areas: maths, geography, PSHE and ICT. We are delighted to have won.”